How to remove Bromate from water?

How to remove Bromate from water?

With the increasingly serious pollution of drinking water sources and the gradual improvement of effluent quality requirements, ozone, which has the advantages of strong oxidation capacity and fast reaction speed, has been increasingly selected for application in drinking water treatment technology.

However, the process of ozonation with water is a disinfecting method that reacts to the Bromide Ion which is frequently found in most water sources for drinking. The ozonation process forms a by-product called Bromate. Bromate has been an undesirable by-product because it is being suspected as a human carcinogen and might provide a risk in the provision of a safe water supply. Controlling the amount of bromate is an important way to ensure the safety of drinking water. How to reduce the amount of bromate is an important issue that needs to be solved urgently for the majority of water treatment solutions.

Zhulin conducted a series of tests and evaluated the effect of the ozone process in the water plants. We studied and the characteristics and rules of ozone oxidation to bromate and examined the removal efficiency of activated carbon for removal bromate.
The following is the whole drinking water treament. 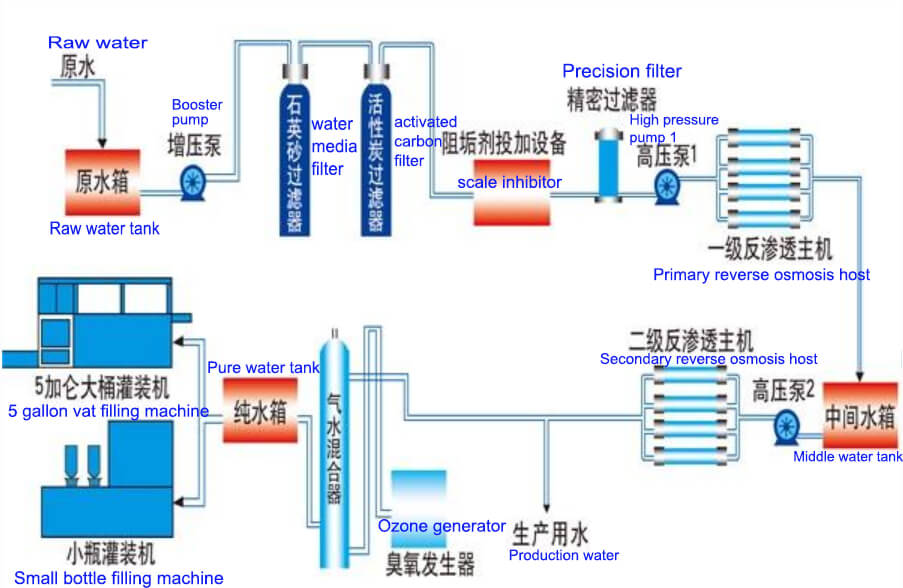 The test results showed that the average removal rate of UV254 in the filtered water by ozone oxidation was 44.5%, CODMn was 20.6%, and TOC was 8.5%. The turbidity has no effect.

When the Br- concentration changes in the range of 50-1000ug/L, the amount of BrO3- generation and the initial concentration of Br- shows a good linear relationship.

With the 200ug/L Br- concentration in the filtered water, the 4mg/L ozone oxidation can control the amount of BrO3- not exceeding 10ug/L within 6mins reaction time.
The average removal rate of bromate by activated carbon is 51.6%. During the conversion of activated carbon to biological activated carbon, the removal effect of bromate is gradually improved, and the improvement effect is very obvious. The removal rate increased from 52.2% to 71.1%. The bromate content of the final effluent dropped from 14.9μg/L to 9.4ug/L.

The research results can solve the problem of bromate's impact on water quality and safety. Activated carbon can provide a scientific reference for the reasonable design and safe application of ozone technology in water treatment.
To learn more details about this type of activated carbon, please contact Zhulin sales representative or visit our "contact us" page.

PRE:
How Does the Activated Carbon Regenerate?
Next:
Edible oil decolorization
Inquiry
We not only provide a good product, but also provide high quality service. If you are interested in our products, you can contact us in the following ways.
Contact Information
Tel: +86-19949132731 Whatsapp: +8619949132731
Email: info@zhulincarbon.com
Please feel free to give your inquiry in the form
We will reply you in 24 hours